We see our relationship as being a long term partnership between our team of experienced finance directors and your business. Using FD Capital means you can attract the best without the costs of a full time commitment.

Our objective is to offer far more in terms of service and experience than you will find by going elsewhere in the market.

Nice to see some reviews springing up ))

FD and CFO Job search on the Playstore

It’s been a busy week for our developers, not only has our Android App gone live in the Google Playstore but our Chrome extension has gone live in the Chrome store too.  So we really have gone Android this week!   Both of our new apps are to the same high standard as our new website, so really good as you would expect from FD Capital.

and our Reporting Accounts one

It really does look good on Android and we anticipate generating additional traffic from visitors to the Google Playstore looking for Senior Finance Job search tools.

Our Job Board is getting busier with opportunities, if you are looking for senior finance professional positions, then remember to check in with our jobs board to see our latest opportunities.

If you are a business looking for an FD or CFO, then please reach out to us, we are always looking for new opportunities for our network.

Nice to see out Chrome Extension is live, we have been developing a number of Android based features to enhance our users experiences

We specialise in the recruitment of Finance Directors (FD’s) and Chief Financial Officers (CFO’s) both on a Part-Time and Full time basis. We have a team of niche specialists available including E-Commerce, Turnaround and non-executive Finance Directors, opportunities are constantly arising so please visit our jobs board regularly.

It's great to see that our new look blog is really getting the attention from visitors that it deserves, we really had gotten attached to the old look and feel and some of its feature will be missed, but we are open minded and prepared to watch and wait and see how this new version works out.

You can find the blog here https://www.fdcapital.co.uk/blog/

and the archive has been replace with a pagination from the home page, its effective but not as attractive as the one on all posts we had before

We have to admit the layout is better and more professional in thie iteration so its a good step forward and we can revisit our missing features with the development team at a later date.

Nice to see our free guide getting around the web. 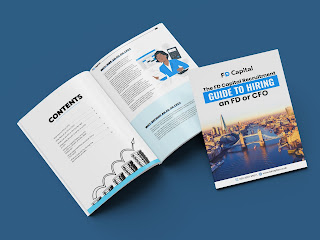 Hiring an FD or CFO means that you can have a dedicated person on your team to deal with the financial side of your business. Not everyone who starts a business comes f rom within the industry or has the knowledge to do things like forecasting or troubleshooting. With an FD, you get to take advantage of their skills and experience to get your business back on track or smash your growth goals.The role of FD or CFO is as much about strategy and planning as it is about monitoring the company’s cash flow. For any company to implement a new strategy, you need to have someone on your team with the specialist skills and knowledge to access your current systems and implement alternatives.

It now appears on

I am not sure how much benefit these places actually are, but its some extra free exposure so any publicity is good publicity as they say.

Amazon always comes out on top

Jeff Bezos founded Amazon in July 1994. He chose Seattle because of technical talent as Microsoft is located there.[32] In May 1997, Amazon went public. It began selling music and videos in 1998, at which time it began operations internationally by acquiring online sellers of books in United Kingdom and Germany. The following year, Amazon began selling items including video games, consumer electronics, home improvement items, software, games, and toys.

In 2002, Amazon launched Amazon Web Services (AWS), which provided data on website popularity, Internet traffic patterns and other statistics for marketers and developers. In 2006, Amazon grew its AWS portfolio when Elastic Compute Cloud (EC2), which rents computer processing power as well as Simple Storage Service (S3), that rents data storage via the Internet, were made available. That same year, Amazon started Fulfillment by Amazon which managed the inventory of individuals and small companies selling their belongings through the company internet site

If one of our team is available and the location works then we put them forward as preferred candidates, as we already know them and they have a track record with us. If an opportunity comes along that is outside of the areas where our FD’s and CFO’s are based (less of an issue now that businesses are more open to remote working) then we go out to the market in much the same way as regular Senior Finance Recruitment service does. We use Linkedin a lot and find that we can attract strong interest if we advertise roles with them.

We see our relationship as being a long term partnership between our team of experienced finance directors and your business. Using FD Cap...

adrianlawrence100
I enjoy spending time with friends and family, we have a holiday home in Cyprus so a lot of focus is on traveling back and forward to the Coral Bay area / Peyia, I am a local councillor in my area of telford and therefore get involved a lot with the Parish and the borough Council. My local town is growing but not in the enviromentally friendly way I would like, I campaign to improve on that. I have held many senior roles including Group Financial Controller, Finance Director, Managing Director, Chairman so my experience has been wide and not purely finance. I have public and private sector experience, and international. My sector experience is mainly in the technology sector for increasingly I have experience in the private equity space, transport and busines services being my others. Travel is a key interest and Cuba has been my regular destination for the last 3 years, Mexico and other caribean island have been fitted in also.